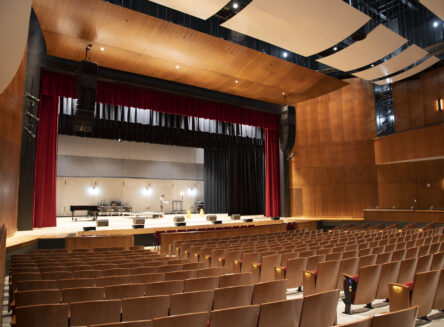 I had the privilege of hearing two nights of live music last weekend. In many ways the music and the venues couldn’t have been more different, but the atmospheres were surprisingly similar.

McClaren Hall opened its doors for its inaugural performance Nov. 4 in FVCC’s new Wachholz College Center. The state-of-the-art performance hall hosted the Canadian folk/bluegrass group The Wailin’ Jennys for its first concert. The air was charged with anticipation and excitement as people filtered into the Center’s reception hall and Wanda Hollensteiner Art Gallery for the first time, visiting with friends and neighbors and taking their seats in the College Center’s centerpiece 1,000 seat performance hall. I saw lots of familiar faces amid the nearly sold-out crowd and said hello to many people I hadn’t seen in quite awhile. The concert hall was infused with a sense of merry togetherness — of community — a community clearly happy to be a part of the moment. McClaren Hall is stunning in every way. Kudos to everyone from the top down who had a hand in making this newest performance venue in Northwest Montana a reality.

I’d had the good fortune to take a guided tour (hard hats included) of the College Center last summer while it was still under construction. We often had to talk and be heard above the din of machinery, but the building’s bones were well in place.

As members of McClaren Hall’s first audience, we walked through the glass doors and were greeted with a warm welcome by smiling staff at every encounter. I’m looking forward, as so many are, to attending many more performances and lectures there in the years to come.

North Dakota singer/songwriter Chuck Suchy and friends put on a memorial concert for a dear friend — of both Suchy’s and the History Museum’s — who’d passed away in November 2021. This group of 150 or so friends, myself included, of the late Pete Skibsrud — affectionately known as Crazy Pete — gathered for a concert to raise money for the museum where he had volunteered for many years. Suchy — officially given the title of North Dakota’s troubadour after the state’s centennial celebration in 1989 — sang with heartfelt and a deep love for his way of life, having been raised on his grandparents’ homestead and gone on to become the third generation to farm and live on the land. He also peppered his performance with stories, some funny, some sentimental.

Besides his acoustic guitar, Suchy played his accordion, paraphrasing beforehand Mother Teresa’s often quoted “do it anyway” words by claiming that although he may not play accordion that well, he’d play it anyway — and went on to play a Ukrainian song with such tenderness it brought tears to the eyes of the woman sitting in front of me. I saw tears in the eyes of a number of audience members at times because Suchy’s music is capable of drawing out fragile emotions.

Again, I was overwhelmed by the sense of community in this most intimate standing-room-only setting.

Live music weaves a cloth that wraps around its listeners’ shoulders, drawing us together, bringing us closer.