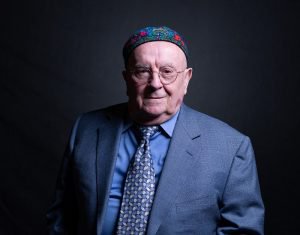 A man who survived the Holocaust and the 2018 shooting at the Tree of Life Synagogue in Pittsburgh will share his story at Flathead Valley Community College on Tuesday, May 7. “From Hungary to Israel to Pittsburgh: One Man’s Testimony of Survival” will begin at 7 p.m. in the large community room of the Arts and Technology Building.

Judah Samet was born in Debrecen, Hungary in 1938 at the dawn of World War II. When Germany invaded Hungary, Samet’s family was taken to a work camp in Austria before arriving at the Bergen-Belsen concentration camp. After 14 months of captivity, they were loaded onto a train destined for a death camp. En route, the Allies bombed the train lines, saving the lives of Samet, members of his family and other prisoners.

After being liberated by American forces in 1945, Samet spent time in a French refugee camp and then immigrated to Israel where he spent the remainder of his youth. He was present in Tel Aviv for the declaration of the State of Israel in 1948 and served as a paratrooper and radio man in the Israeli Defense Forces.

In 1961, Samet immigrated to Canada, where he eventually met his future wife, Barbara Schiffman. The couple moved to Pittsburgh and joined Barbara’s father’s business, Schiffman’s Jewelers. In 1966, the family became members of the Tree of Life Synagogue, where Samet served as the Torah reader for 40 years and continues to worship today.

Samet was attending a service at the Tree of Life Synagogue on Oct. 27, 2018, when a gunman opened fire, killing 11 people and wounding many others.

In addition to his May 7 engagement at FVCC, Samet will speak at the Whitefish Performing Arts Center on Monday, May 6 at 7 p.m. Both events are free and open to the public.

Samet’s visit to Montana is made possible by the Glacier Jewish Community/B’nai Shalom, FVCC and The Lodge at Whitefish Lake. For more information, contact FVCC Global Programs Director Gerda Reeb at 756-3889 or greeb@fvcc.edu.