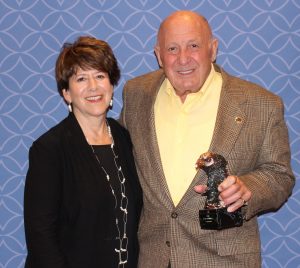 Longtime Flathead Valley businessman and community philanthropist Paul Wachholz was honored with Flathead Valley Community College’s prestigious Eagle Award during the 24th annual President’s Dinner on May 16. The Eagle Award honors individuals who have made outstanding contributions to the college.

FVCC President Jane Karas presented Wachholz with the Eagle Award and thanked him for his leadership, service and philanthropy to the college.

“We are grateful to Paul for his incredible generosity and belief in FVCC,” Karas said. “Paul has touched many lives in Northwest Montana and created endless possibilities for our students and the community long into the future.”

Wachholz’s business acumen became evident at an early age, first as a multi-tasking newspaper delivery boy and then as a teenaged owner of a landscaping business. One of his landscaping customers, a retired professor from Columbia University, admired Wachholz’s drive and intelligence and encouraged him to attend college. Wachholz began his pursuit of a college education at Northeastern Junior College in Sterling, Colorado and went on to earn a bachelor’s degree from the University of Northern Colorado and complete classes at the University of Colorado’s Graduate School of Banking.

In 1967, Wachholz’s employer sent him to Kalispell to help manage the Conrad Bank. He fell in love with the Flathead Valley and eventually built two successful businesses here, Coldwell Banker Wachholz & Company and Fun Beverage, Inc.

Over the years, Wachholz has been a vocal advocate for FVCC’s role in preparing students for successful futures. As a major sponsor of FVCC’s Festival of Flavors for the past 12 years, Fun Beverage, Inc. has helped the college raise millions of dollars for student scholarships. In 2018, Wachholz stepped forward again in support of FVCC and pledged $4 million toward the development of a College Center on campus.

“Throughout my life, I have not valued money by its worth, but rather by what it can specifically be used for,” Wachholz said. “Investing in FVCC and the College Center is personally very gratifying to me, because it will become a focal point of the expanding college campus, bringing students and community members together.”

In addition to his financial support of FVCC, Wachholz has been generous with his time and talent. He has served as a guest speaker at numerous college events, encouraging students to work hard and believe in their abilities.