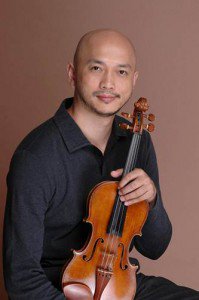 Flathead Valley Community College will welcome husband-and-wife visiting musicians Fang-Liu and Jessica Chen from Taiwan who will present two master string classes and a concert for the community this month.

Violinist Fang-Liu holds a Bachelor of Psychology from Fu-Jen Catholic University, a Master of Music from Manhattan School of Music, where he was a student of famed Violinist Lucie Robert. He is a founding member of the Ars Trio Taipei, performing over 360 concerts in locations across the globe, such as the United States, Canada, Costa Rica, Israel and most notably, Taiwan, where the group has performed numerous concert series to introduce classical music to audiences in Taiwan. In an effort to effectively promote the development of classical music and strengthen social education, Fang-Liu founded the Taiwan Classical Music Society, where he continues to work on the programming of multiple projects. He currently serves on the faculty of Nan-Hwa University in Taiwan.

Cellist Jessica Chen was born in Taichung, where she began studying the cello at the age of nine. At 11, she won the Music Competition, cello division, in Taichung City, and later won the National Music Competition, both in the adolescent and adult sections, in Taiwan. She also won the Concerto Competition, held by Taipei City Symphony Orchestra, and performed with the orchestra under the baton of Shao-Chia Lu. With merit scholarship, she studied with world-renowned cellists Marion Feldman and Lorne Munroe at Manhattan School of Music in New York. As a founding member of Ars Trio Taipei, Jessica and her group members have performed many concerts since 1994 and attended the 5th Music Festival in Costa Rica, Banff Music Festival and FAME Music Festival. She also is the founder and artistic director of the Taiwan Classical Music Society, sharing her time playing solo concerts, teaching, presenting master classes and organizing seminars. She currently serves as an associate professor at National Taipei University of Education, Shih-Chien University and National Taichung University in Taiwan.

During their visit, Fang-Liu and Jessica will present two master classes for FVCC string students. The classes will take place February 13 from 4:30 to 6 p.m. and February 19 from 5 to 6 p.m. in room 144 inside the Rebecca Chaney Broussard Center for Nursing and Health Science on the college campus. Community members are invited to participate by contacting FVCC music faculty Wai Mizutani at 756-4814 or Nicole Sanford at 756-4813 to make advance arrangements. The classes are open to the community to observe.

On February 19, Jessica will join Mizutani and Sanford for the opening performance of the FVCC Spring Music Concert Series. The event is free and open to the public and will take place at 7 p.m. in the large community room inside the Arts & Technology Building on campus.