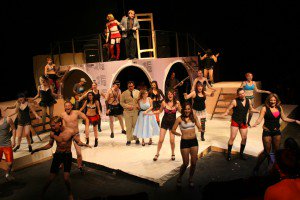 Flathead Valley Community College Theatre will open its 2012-2013 season with an edgy, exciting performance of “The Rocky Horror Show.”  The award-winning musical debuted in 1974 in Los Angeles and on Broadway in 1975.

Written by Richard O’Brien, the show tells the story of Brad and Janet, a clean-cut, naive couple who wind up stranded on the side of the road.  They seek help at a spooky castle where they are surprised to find themselves getting much more than they had bargained for.

FVCC’s début of “The Rocky Horror Show” has been eagerly anticipated since early last year when director Joe Legate announced that it would be performed.  Legate says the caliber of this year’s theatre students influenced his decision to produce this particular show.

“We have students right here, right now who will benefit greatly from the mayhem this show generates,” said Legate.  “We have triple threats here this year.  They can sing, act, and dance.  We can do whatever show we please.  It’s a luxury that we take full advantage of.”

The show’s massive set, designed and built by FVCC Theatre Instructor Rich Haptonstall, includes four levels, the highest of which is 10 feet off the stage floor.

We wanted to create something like a cheesy b-horror movie, with the upstairs lab, lots of dance space, and multiple levels,” said Haptonstall.  “Rocky is a spectacle, fast-paced without a lot of scene changes.  It’s a very detailed-oriented show.”

Haptonstall added the show provides the perfect opportunity to show off the theatre’s new lighting equipment.

“We are excited to debut our new lighting technologies,” he said.  “They will bring lots of energy to the show.”

“The Rocky Horror Show” stands out among cult classics due to its loyal fan following and its engagement with the audience.  Audience members are encouraged to dress up and be prepared to participate in the experience and interact with the actors.  Legate says that is what he is most excited about.

“I can’t wait to see the reaction of our company when they have hundreds of people screaming at them, watching them in complete states of exhaustion,” he said.  “It’s going to be wild!”

Performances of “The Rocky Horror Show” will take place October 26, 27, and 31 and November 1, 2, and 3 at 7 p.m. in the FVCC Theatre inside the Arts and Technology Building on the FVCC Kalispell campus.  Tickets are $15 for general admission and $10 for students and seniors.  Advance tickets can be purchased at the FVCC Bookstore in Blake Hall or by calling (406) 756-3814, at Campus Grounds inside the Arts and Technology Building, or online at www.fvcc.edu/fvcctheatre.html.  Remaining tickets will be available for purchase at the door prior to show times.  Purchasing advance tickets is strongly encouraged due to FVCC Theatre’s sold out run of the show in 2008.

The play is strongly recommended for mature audiences only.  For more information, contact Legate at 756-3906, or email jlegate@fvcc.edu.