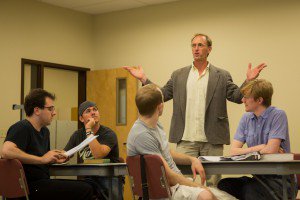 Flathead Valley Community College Theatre will conclude its summer theatre season with its production of the two-time Tony Award-winning masterpiece, “The History Boys,” by Alan Bennett. Replete with Shakespeare, Auden, Wittgenstein and other illustrious quotes and themes, “The History Boys” tackles the wondrous subjects of history, philosophy, edification and all of our places in it.

‘The History Boys” opened on Broadway in 2006 and captured two Tony Awards—one for Best Play and the other for Best Actor for the late Richard Griffiths’s role as Hector.

The play is set in Sheffield, England, where eight brilliant boys, in their final term at school, are faced with the challenge of their entrance exams for Oxford and Cambridge. Caught between the idyllic philosophy of their former teacher, Hector, that education exists for its own sake, and the far more pragmatic demands of their new professor, Irwin, the boys must navigate the perils of young male life as well as attempt to answer far more lofty and cerebral questions, including an entire scene encompassing a debate on the Holocaust and dialectic discussions on the poetic works of Thomas Hardy and W.H. Auden. The play, however, has its fantastically comedic scenes as well, returning FVCC Theatre Director Joshua Kelly promises.

“’The History Boys’ is undoubtedly entertaining,” said Kelly. “It gives a great comedy that few people would expect but will prick your brain in a truly satisfying way. You leave the play feeling more a part of the world than when you arrived.”

Suffused with sharp, British wit similar to the works of Michael Frayn or a British Aaron Sorkin, Kelly says the humor involved is widespread and intelligent, including an entire scene performed in tongue-in-cheek French depicting a house of ill-repute, sudden, parodic reenactments of famous classic movies and overall sprinkled with songs of Gracie Fields, Richard Rogers and quotes of every literary denomination. “The History Boys” is sure to bring delight and contemplation in equal measure to anyone who gets a seat.

“The History Boys” will be performed August 8, 9, 15 and 16 at 7 p.m. in the Flathead Valley Community College Theatre inside the Arts and Technology Building on the college’s Kalispell campus. Tickets are $5 for general admission and free admission for all students. Advanced tickets are available at the FVCC Bookstore or online at www.fvcc.edu/theatre. Remaining tickets will be available for purchase at the FVCC Theatre Box Office one hour before showtime. Due to language and subject matter, mature audiences are advised.

For more information, call the FVCC Theatre Box Office at 756-3906.