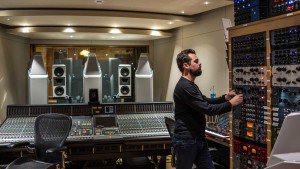 Flathead Valley Community College will offer a new music course this fall for digital music enthusiasts and aspiring professionals. The college welcomes SnowGhost Music Owner, Producer and Engineer Brett Allen who will teach “Introduction to Digital Music,” the first course in the music technology sequence exploring the past, present and future of how technology has influenced the way music is created and shared.

The three-credit course will provide the history of mechanical and recorded music, an introduction to the music industry and tools for building self-directed careers within the changing field of music technology. Also covered will be the arrival of electronic instruments and music, synthesizer usage in today’s music industry, the sampling process and music consumption from published sheet music to modern-day streaming and subscription-based music services.

Allen attended University of California Santa Cruz where he merged music composition and performance, electrical engineering, physics and economics into an interdisciplinary degree. Allen studied under Simon VanZwanenberg, owner of The Integrated Solutions Organisation (The-ISO), in the United Kingdom and at famed producer Hugh Padgham’s Sofa Sound Studio. Under VanZwanenberg, he learned how to produce music on the classic early Solid State Logic 9000 series consoles as well as how to maintain and service the flagship Solid State Logic 9000 XL at the company’s Oxford factory.

At SnowGhost Music, Allen produces and engineers for up-and-coming and legendary musicians, such as Kris Kristofferson, Death Cab for Cutie, Jason Lytle, Erica Von Kleist, Wayne Horvitz, Marty Erlich, John Pizzarelli, Gerald Clayton, Zeena Parkins, Stars of the Lid, Matmos, So Percussion, Ramblin’ Jack Elliot and Bela Fleck, among others. With most of his clients based outside of Flathead Valley, Allen began thinking of ways to integrate into the local music production community. He was inspired to bring the “Introduction to Digital Music” course to FVCC after working with Whitefish High School students on music and video production projects, which played a role in leading to the creation of the high school’s new Center for Applied Media Arts and Sciences.

“The experience working with Whitefish High not only introduced me to some great young people trying to get their feet in the door but also to some great teachers and administration, and it would eventually lead me to FVCC,” said Allen. “I encourage anyone interested in bridging the gap between music and technology to take this course.”

For more information on the “Introduction to Digital Music,” contact Nicole Sanford at 756-4813 or nsanford@fvcc.edu. The deadline to apply for admission to FVCC is August 20. For admissions requirements, visit www.fvcc.edu or call 756-3848.