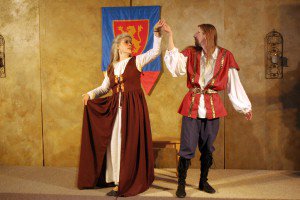 Shakespeare Makes a Scene at FVCC

Flathead Valley Community College Theatre will continue its fall season with the production of an original show by two Columbia Falls artists. “Shakespeare Makes a Scene” is the creation of Jeremias Johnson and Sally McBride, and of course William Shakespeare. Whether you are new to Shakespeare’s works or have enjoyed the work of the Bard for years, you will take a fun and enlightening romp through some of his best scenes woven together with some surprising twists.

This two-person show, starring Johnson and McBride, will take the audience on an entertaining journey of “he said-she said,” exploring several of the sometimes witty, sometimes tumultuous and very often tragic relationships of some of the men and women subjects of Shakespeare. The script goes from serious to silly quicker than you can say a rhyming couplet. Thou wilt laugh, thou wilt cry, and sometimes, thou wilt wonder why.

Johnson has loved to immerse himself in Shakespeare’s works for as long as he can remember and happily admits he is a Shakespeare geek. He is a seasoned performer of Shakespeare’s plays and is excited to bring some of his favorite scenes to the stage, along with some of his and McBride’s own brand of wit and narration. He studied at the National Shakespeare Conservatory in New York and has performed with troupes including Twelfth Night Theatre Company in Omaha, Neb., Wisconsin Shakespeare Festival as well as a stint with the Old Creamery Theatre in Iowa. He has also worked as a performer at the Minneapolis Renaissance Festival.

Some of Johnson’s performances include roles in Shakespeare plays such as “Richard II,” “Twelfth Night,” “Taming of the Shrew” and “Macbeth.” He also made his directing debut for Kalispell Repertory Theatre with “Macbeth.” Johnson and McBride met while performing in a community theatre production of “The Philadelphia Story” in Cedar Falls, Iowa.

With the exception of having to read Shakespeare in high school, McBride was basically a newcomer to Shakespeare at that time. She performed in a number of community theatre productions in Iowa, including children’s theatre. Johnson sparked McBride’s interest in Shakespeare, challenging her to audition for Lady Macbeth in the Kalispell Repertory Theatre production of “Macbeth.” She earned the role, and alas, the language of Shakespeare was imprinted on her as well.

“We are excited to perform our show at FVCC and hope that even those who don’t think they understand or like Shakespeare will give it a try,” said Johnson. “Shakespeare wrote his shows not only for the nobility but for the commoner as well. Our goal is to make his works accessible to everyone, too.”

McBride added, “We really enjoyed creating a show around Shakespeare’s amazing scenes, and we are excited to present them in our own unique style.”

Performances will take place September 19 and 20 at 7 p.m. in the FVCC Theatre inside the Arts and Technology Building on campus. Admission is free.