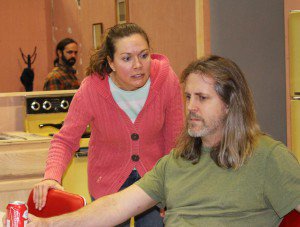 Flathead Valley Community College’s Theatre Arts Department opens the 2016 season with a production of Stephen Metcalf’s love story, “Strange Snow”, February 11, 12 and 13. Professional local actors Nick and Rebecca Spear will be joined on stage by FVCC Associate Professor of Theatre Rich Haptonstall in this three-person play. All proceeds from the event will go toward scholarships for FVCC theatre students.

“Strange Snow” revolves around two Vietnam buddies, Megs and David, who reconnect after the war and are quickly caught up in a conflict with one another when one man falls in love with the sister of the other man. According to FVCC Theatre Director Joe Legate, “It’s frequently funny, occasionally sad, profoundly moving and ultimately, uplifting and filled with hope.”

As a tribute to the men and women who have served our country in Vietnam and elsewhere, FVCC invites all veterans to attend the February 11 performance free of charge. Veterans may obtain a free ticket at the FVCC Bookstore, online at www.fvcc.edu or at the box office.

Legate has brought together a talented cast to start the 2016 theatre season. Rebecca Spear has been teaching and directing in FVCC’s Theatre Arts Department since 2014. Audiences may recognize Spear from Alpine Theatre Project’s productions of “Chicago”, “Guys and Dolls”, “Little Shop of Horrors” and others. She also appeared in the San Diego and National Touring companies’ productions of “I Love You, You’re Perfect, Now Change” and “Forbidden Broadway: SVU.” Born and raised in St. Louis, Spear earned bachelor’s degree in theatre from the University of Missouri-Columbia and a master’s degree in theatre from San Diego State University.

Nick Spear has also been teaching, directing and writing original plays for FVCC since 2014.  He earned a master’s degree in theatre from San Diego State University. Along with working in every theatre in the Flathead, Spear is also the front man for the popular local band the New Wave Time Trippers.

The final cast member, Rich Haptonstall, has spent the last 25 years teaching and creating theatre in various parts of the country, including California, Michigan, Kentucky, Nebraska, Alabama, Georgia and most recently Montana. Haptonstall has directed, designed or acted in more than 120 plays, including his favorites: “Man of La Mancha”, “Wit”, “The Crucible”, “Cabaret”, “The Pillowman” and “Equus.”

“I love ‘Strange Snow’,” said Legate. “It’s a simple, heartfelt love story complicated by a too common tragedy.  For hopeless romantics like me, what could be better for a Valentine’s weekend?”

Performances begin at 8 p.m. on Friday and 7 p.m. on Thursday and Saturday in the FVCC Theatre located inside the Arts and Technology Building. Tickets are available at the FVCC Bookstore, online at www.fvcc.edu and at the box office on show nights. Patrons of the February 12 Chef’s Table dinner will be treated to a reserved seat at that night’s performance. Chef’s Table online tickets and additional information can be found at www.fvcc.edu/chefstable or by calling 756-3632.  “Strange Snow” is recommended for mature audiences due to strong language.