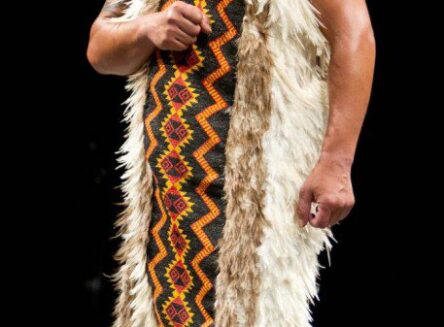 The Fulbright Scholar-in-Residence Program brings scholars and professionals from abroad to U.S. colleges and universities to significantly internationalize campuses and curricula.  Leonard is one of approximately 850 outstanding foreign faculty and professionals who will teach and/or research in the United States through the Fulbright Visiting Scholar Program in 2012-2013.

The Maoris are the Polynesian indigenous people of New Zealand whose culture is still an integral part of New Zealand life today.  Through a Fulbright Foundation grant awarded to FVCC, the college will welcome Leonard on its campus.  Leonard holds a master’s degree in Maori language and management and brings a lifetime of experience in traditional Maori art forms including weaving, carving, and dance.

Growing up in family with traditional Maori artists, Leonard learned the art of weaving and carving at a very young age.  He credits his family with influencing his induction into the arts and reflects his earliest memories of his grandmother who wove until she reached 100 years old, weaving a floor mat.

“She played the most pivotal role in my passion for weaving. At the age of 112, she critiqued my third kete (basket) saying ‘he ataahua, engari he ririki i konei…kare e roa ka whati – It’s lovely but too fine in this section… it won’t be long before it breaks’,” he recalled.

Leonard’s uncle, an influential community figure, chief and elder, renowned as the last master carver of the Ngati Tarawhai School of carving, began teaching him how to carve at the age of 12.

Leonard says that while many modern Maori artists are driven to their art forms through their self-discovery later in life, he has been fortunate to be secure in his identity and his art from early on.

“Although I may say that I have chosen the arts of our Maori people, it more likely chose me,” he said.

Leonard teaches weaving to his clan and local community.  He serves as a committee member of the national weavers body, Te Ropu Raranga Whatu, gives lectures and dissertations on the subject, and writes for a New Zealand weavers magazine.  He also spent two years teaching the Maori language to bachelor’s and master’s students at Te Wānanga o Raukawa, a Maori school in New Zealand.

In 1986, at the request of one of his elderly work colleagues, Leonard joined and began performing with their entertainment troupe. Through this art form, he has traveled the world, been involved in many cultural exchanges, and served as an ambassador for Māori and New Zealanders.

This fall, Leonard will instruct a weaving course, Te Whatu Taniko: The Art of Taniko Weaving Mondays and Wednesdays from 1 to 3:30 p.m.  Students will learn the art of Taniko weaving through the use manufactured waxed cord to create a headband, belt and pouch.

Leonard specializes in weaving two pieces used in traditional Maori performance – both of which he hopes to expand on during his residency in Kalispell.  The first, poi, are woven balls used as percussion.  The second, piupiu, are the woven skirts worn by performers.

Leonard says he is looking forward to collaborating with students as well as Native American artists while serving as a scholar-in-resident.

“I hope to examine whether there is a crossover in our cultures of techniques, designs and traditions that can be employed and reflected in my art to clearly and distinctly represent both cultures,” he said.

Fall courses begin August 27 and run through December 19.  Registration information for Leonard’s classes is available at www.fvcc.edu or by calling 756-3848.

About the Fulbright Scholar-in-Residence Program

The Fulbright Program is the flagship international educational exchange program sponsored by the U.S. government and is designed to increase mutual understanding between the people of the United States and the people of other countries. Recipients of Fulbright grants are selected on the basis of academic or professional achievement, as well as demonstrated leadership potential in their fields.

The primary source of funding for the Fulbright Program is an annual appropriation made by the U.S. Congress to the U.S. Department of State, Bureau of Educational and Cultural Affairs.  Participating governments and host institutions, corporations and foundations in foreign countries and in the United States also provide direct and indirect support.

For more information about the Fulbright Program, visit fulbright.state.gov or contact James A. Lawrence, Office of Academic Exchange Programs, at (202) 632-3241 or at fulbright@state.gov.