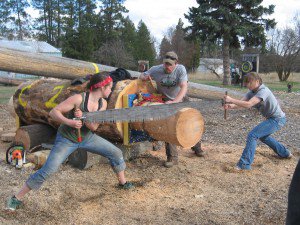 The purpose of logger sports is to acknowledge the rich history of forestry and logging and keep traditions alive.  Event participants will be competing for the Bull of the Woods, Belle of the Woods and Top Team Awards.  FVCC has hosted the annual competition since 1972, with the exception of 2006 when the new logger sports arena was under construction.

The FVCC Logger Sports team has seen a wave of success since it started competing nationally in 1984.  The team has taken home 14 first-place wins from the Association of Western Forestry Clubs (AWFC) Conclave, the largest logger sports event in the Northwest which includes all logging teams west of the Mississippi River.  FVCC is the only team to win four consecutive Conclave championships (1988 – 1991).  It also is the only team to capture the Conclave title five years in a row (1996 – 2000).

Last March, 14 colleges and universities competed in the 73rd annual AWFC Conclave including big name forestry schools such as Oregon State University, Humboldt State University, Cal Poly, Northern Arizona University, The University of Montana, and Colorado State University.  FVCC was one of only three two-year colleges to compete.  A record 183 athletes competed in the three-day competition.  Continuing the team’s long history of success, FVCC took first place, outscoring the second place team by 116 points.   Sixteen of the 20 competitors from FVCC placed in an event.   This year’s AWFC Conclave will take place at The University of Montana April 23 through 27.

Taking home the championship title wasn’t what head coaches Annie and Bob Beall were most excited about.  They said they were most proud of their team for capturing the Conclave’s Top Sportsmanship Award.

“Our focus has always been on sportsmanship and teamwork,” said Annie.  “If you’re willing to show up and put in the time and the work, we don’t care if you take last every single time – you’re a valued part of the team.”

Annie has been involved in FVCC Logger Sports, either competing or coaching, for the past 30 years.  She says her greatest enjoyment has been watching someone who has never had the chance to be part of a competitive team develop into a valued member of the group.

“They get to interact with other people and be a productive member of the team in all aspects, not just competition results,” said Annie.  “A majority of our team members have never had the chance to experience this, and I get to see how it changes their lives for the better.”

Annie also explained that each team member is expected to pull his and her weight, helping gather wood for practice, set up the arena, and cook and clean up during campouts when the team travels for events.

“I think there are a lot of life lessons to being a part of a group,” said Annie.  “You don’t watch the women cook and clean up after you.  If you didn’t do the cooking, you’ve got to do the cleaning.”

“Not only does the team practice hard and put in a lot of time, we expect them to go out and give back to our community,” said Annie.  “It’s our way of saying thank you to everyone in our community who has helped and supported us over the years.”

This year’s Stumpjumper Days competition will attract students from four northwest colleges and universities, including The University of Montana, University of Idaho, Spokane Community College and FVCC, who will compete in various events such as axe throw, horizontal hard hit chop, obstacle pole buck, single buck and bonzaii logger.

The competition is free and open to the public and will take place from 8 a.m. to 5 p.m.  The arena is located on the first road north of the college’s Kalispell campus and east of Hutton Ranch Plaza on Highway 93.  In addition to Stumpjumper Days, community members will have the opportunity to watch the team conclude the season as it will perform free demonstrations at the annual Family Forestry Expo held on Mother’s Day weekend in Columbia Falls.