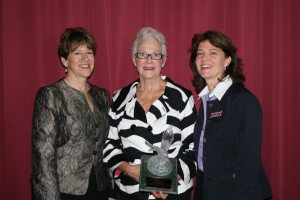 The Mercords, a family of longtime supporters of Flathead Valley Community College, were presented the college’s prestigious Eagle Award for the 2012-2013 academic year by FVCC President Jane Karas, Ph.D., during the 18th annual President’s Donor Dinner May 16.  The award honors individuals who have made outstanding contributions to FVCC.

According to the nomination, the Mercord’s history with the college dates back to the leadership role Chuck Mercord played when FVCC was founded in 1967 and has continued with active participation and support today.  He also was instrumental in the creation of the college’s foundation in 1976.  In 2004, Chuck Mercord was honored with the Eagle Award.

“This family has made FVCC a family tradition throughout the college’s 46 years,” said Karas.  “In addition to sharing their generosity, the members of this family have set an example of passing leadership and service from one generation to the next.”

The Mercord Family established a memorial for Chuck at FVCC, and through gifts from the family and community members, it provided generous funding to build the FVCC Scholars classroom and study area.  The Scholars Program at FVCC, now in its third year, has served 150 students to date.  With the additional funds, the family established an endowment for The Scholars Program at FVCC to provide annual mini-grants for students to attend regional and national research conferences to present their undergraduate research.   The endowment also provides an annual Mercord Family Scholarship for a student with great financial need.

Kathy Mercord currently serves on the FVCC Associate Foundation Board and on event committees, including Festival of Flavors and the donor development committee.  An exceptional community volunteer, she has served selflessly over the years, always advocating for FVCC in her wide circles.  In partnership with the foundation, she oversees the Owen E. Sowerwine, Alton Pearce and Milton Mercord Memorial Fund at FVCC, a fund established in part in memory of Chuck’s father, Milton Mercord, who strongly believed in building strong communities.

Their daughter, Leslie Mercord, an accomplished investment provider, has played an extensive role on the college’s Foundation Board, serving five years as treasurer and then rising to the chair of the board these past two years.  She previously led the board’s finance and investment committee.  Under her leadership, the Foundation assets doubled, events and projects grew, and a record number of scholarships were awarded.  She served on the executive committee for two major fundraising campaigns for buildings, the last being the Rebecca Chaney Broussard Center for Nursing and Health Science.  She has shared her financial knowledge with students through continuing education programs and with members of the FVCC Foundation board as well as other boards.  She has thoughtfully shared her love of the college and brought key community members into the FVCC family.

Karas acknowledged the family for sharing their passion for education and the value that a community college brings to Northwest Montana to serve local students and bring them a better life.

“FVCC owes a debt of gratitude, and we are a better college because of the leadership, service and generosity of this family,” concluded Karas.

The perpetual award of the college symbol, a soaring bald eagle, is permanently displayed in the foyer of Blake Hall on the FVCC campus.  Each year’s recipient’s name is engraved on a gold plate and mounted under the eagle, joining the other award winners.