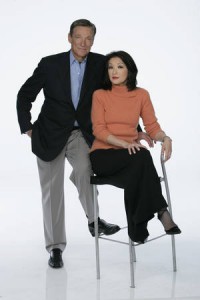 Husband and wife award-winning national journalists Maury Povich and Connie Chung will kick off Flathead Valley Community College’s inaugural President’s Lecture Series as they present “A Conversation with Maury and Connie” for the community July 26.  Free and open to the public, the event will take place from 6 to 7:30 p.m. in the large community meeting room inside the Arts and Technology Building on the college’s Kalispell campus.

Chung began her television journalism career in 1969 at a local station in her hometown of Washington, D.C.  She later worked for all the major networks, starting in 1971 with CBS News, covering politics and world news for the CBS Evening News with Walter Cronkite.  In 1993, she became the first woman to co-anchor the network’s national flagship news broadcast, the CBS Evening News.  In addition to anchoring several prime-time network magazine programs, she conducted a series of exclusive interviews including PRC leader Li Peng on the five-year anniversary of Tiananmen Square; the first and only interview with Joseph Hazelwood, captain of the Exxon Valdez; the first interview with Los Angeles Lakers star Magic Johnson after he announced he was HIV positive; and Congressman Gary Condit (D-CA) concerning the disappearance of his intern Chandra Levy.

Chung is the recipient of numerous awards including the George Foster Peabody Award, three Emmy awards, the Amnesty International Human Rights Award and several awards for an investigative hour on a 1966 civil-rights case. The report resulted in the indictment, trial and conviction of a murderer more than three decades later.  In 1997, she was a Harvard fellow at the Joan Shorenstein Center on the Press, Politics and Public Policy at the John F. Kennedy School of Government at Harvard University.  She serves on the Board of Trustees of the University of Maryland, Journalism Board of Visitors of the Philip Merrill College at University of Maryland, the Advisory Board of the CUNY Graduate School of Journalism and the Flathead Beacon Foundation in Montana.

Povich will return in September for his 14th season as host of NBC Universal Domestic Television Distribution’s syndicated hit talk show “Maury.”  His history of syndicated television began in 1986 with the groundbreaking Fox newsmagazine “A Current Affair” and has spanned over 20 years with Paramount’s “The Maury Povich Show” (1991-1998), and “Maury” (1998-present).  Povich heads Mo Po Entertainment, which produces original programming content and won an Academy Award in 2003 for Best Documentary Short, “Twin Towers,” of which he was an executive producer.  In 2007, he and Chung founded the “Flathead-Beacon”.

Povich’s began his career in broadcast journalism where he began as a radio street reporter, which led to news, talk and sports shows on WTTG-TV, a local Metromedia station. Povich was the original host of a two-hour daily live news talk show titled “PANORAMA,” which became a television staple for those working on Capitol Hill and in the White House. It was the only midday news show in the nation’s capital before the advent of the 24-hour cable news networks.  During the tumultuous 60’s and 70’s, Povich covered the aftermath of the assassination of John F. Kennedy, riots in Washington following the death of Martin Luther King, Jr., anti-war demonstrations during the Vietnam War and the historic events of Watergate.  In 1977, after 15 years in Washington broadcast journalism, Povich left his hometown and over the next seven years anchored newscasts for ABC, CBS and NBC owned and operated stations in Chicago, Los Angeles, San Francisco and Philadelphia.

Seating will be limited and available on a first-come, first-served basis.  The event is sponsored by FVCC, “Flathead Beacon” and Kalispell Chamber of Commerce.