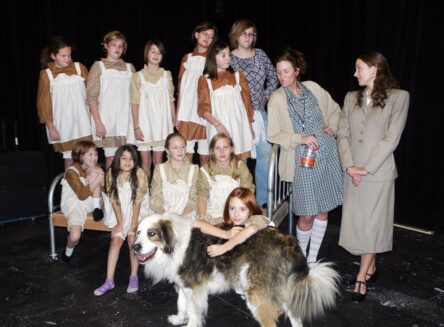 Flathead Valley Community College Theatre will perform a captivating production of “Annie: The Musical,” based upon the popular Harold Gray comic strip “Little Orphan Annie,” and featuring music by Charles Strouse and lyrics by Martin Charnin. The popular Broadway musical, “Annie,” won seven Tony Awards including Best Musical and has been produced by groups all over the world.

The musical, which originally opened on Broadway in 1977 and ran for nearly six years, tells the story of 11 year-old, red-headed orphan, Annie. Set in the Depression Era in New York City, the audience will fall in love with Annie who, cast aside by society, remains ever-optimistic in her pursuit of a finding a family who will offer her a better tomorrow.

The show features a cast of over 30 FVCC students and community members, including 12 local children between the ages of 8 and 13 cast as orphans, who come together to recreate the magic of “Annie” through musical theatre. The production includes its hallmark songs “Hard Knock Life” and “Tomorrow”, among others.

“The story of Annie is a timeless classic about hope and positive thinking,” said FVCC Theatre Instructor and show director Rich Haptonstall. “Being set in the depression era, it reflects the situation in America today, and it will speak to today’s audience as well as it did when it opened in nearly 35 years ago.”

Performances of “Annie” will take place December 2, 3, 8 and 9 at 7 p.m. and December 4 and 10 at 2 p.m. in the FVCC Theatre inside the Arts and Technology Building on the FVCC Kalispell campus. Tickets are $10 for general admission and $5 for senior citizens. Admission is free for FVCC students. Purchase advanced tickets at the FVCC Bookstore in Blake Hall at (406) 756-3814 or online at www.fvcc.edu/fvcctheatre.html. Remaining tickets will be available for purchase at the FVCC Theatre Box Office 30 minutes prior to showtime.