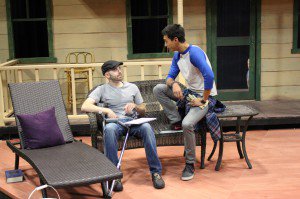 Flathead Valley Community College Theatre will continue its twenty-third season with its production of the Tony Award-winning heart-felt comedy “Fifth of July” by Lanford Wilson.

Capturing 11 nominations and winning three Tony Awards, Wilson’s play takes a humorous yet lucid examination of an American family coming to terms with their past looking toward the future.

Presented by New York’s famed Circle Repertory Company, this brilliant, enthralling play has been hailed as a major work by one of theatre’s most important and celebrated writers. Alternately funny and moving, the story deals with a group of former student activists and the changes and attitudes that have been wrought in their lives in the years following college.

New York Daily News called the New York production “one of the most incredibly well-written, beautifully acted, profound and moving and often hilarious plays it has ever been my privilege to see in the American theater.” According to Cue Magazine, “few contemporary playwrights are as craftsmanlike and humane, or as wise as Lanford Wilson. There aren’t many plays to see that are as interesting and absorbing and feeling and funny as this.”

“Fifth of July” will be presented October 31, November 1, 6, 7 and 8 at 7 p.m. Tickets are $10 general admission, $5 senior citizens and free to students. Advance tickets are available online at www.fvcc.edu/theatre, at the FVCC Bookstore Monday through Thursday from 7:30 a.m. to 5:30 p.m. and Friday from 7:30 a.m. to 5 p.m. or by calling 756-3814. Remaining tickets will be available for purchase at the FVCC Theatre Box Office prior to show times.

The show is recommended for mature audiences as the script contains strong adult language.