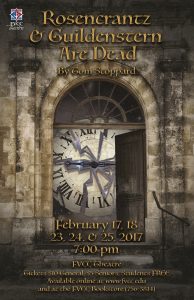 In honor of the 50th anniversary of FVCC’s founding, FVCC’s Theatre Department will perform Tom Stoppard’s 1967 play “Rosencrantz & Guildenstern Are Dead” on February 17, 18, 23, 24 and 25. All performances begin at 7 p.m. in the campus theatre located inside the Arts and Technology Building.

“Rosencrantz & Guildenstern Are Dead” is the tale of “Hamlet” as told from the worm’s-eye view of two minor characters in the classic play by William Shakespeare. In Stoppard’s best-known work, this Shakespearean Laurel and Hardy finally get a chance to take the lead role, but do so in a world where reality and illusion intermix, eventually leading to a tragic end for the two heroes.

The New York Daily News has described the play as, “A stimulating, funny, imaginative comedy.”

The play’s content is deemed appropriate for pre-teen to adult audiences. Tickets are $10 for the general public, $5 for senior citizens and free for all students. Tickets are available for purchase at the door or in advance at the FVCC Bookstore or online at www.fvcc.edu/theatre.