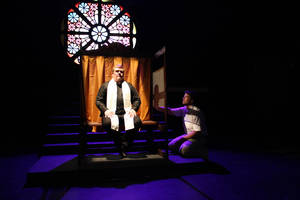 Flathead Valley Community College Theatre has run a long list of challenging works—fraught with talent and difficult content not only to perform but to understand, from the technical and vocal efforts of “Evita” to the bone-chilling plot of “Pillowman” to the controversial storylines of “Cabaret”, “Chicago” and “The Rocky Horror Show”.  But standing out in this lauded list of theatrical triumphs comes this July’s performance of the highly-reviewed “bare: a pop opera”, a moving story about teens searching to find themselves, no matter what environments may oppress their individualities, and the consequences that can be involved when people are forced to be who they are not.  Like Broadway’s Pulitzer Prize and Tony Award- winning-hit “Doubt”, “bare” challenges religion and the values it instills.

In their senior year at St. Cecelia’s Catholic High School, several students seek to identify themselves and express their true personas despite their faiths and the social stigmas that surround them.  Main characters Peter and Jason struggle to come to terms with opposing ideals of their own homosexual relationship in the views of their personal connections, but more importantly in the face of the Catholic Church, which ultimately serves as the play’s main antagonist.  Meanwhile, other students are desperate to calm the tempests of their own situations—from rejection, to lost loves, to loneliness and confusion, “bare” seeks to exemplify all those who break the mold and do not fit the conventional standards of society.

As the themes of the play unfold, the story demands attention.  As a pop opera, almost the entire show is sung beautifully, including a large section of the play where students perform “Romeo and Juliet” entirely in harmonies and intricate solo lines.  As is classic of the play-within-a-play device in theatre, many of the Shakespearean character twists parallel the daily lives of the students in St. Cecelia’s, including fickle loves, haunting dreams—and a poignant death when all is done.

Plot aside, the performance value of the show proves to be just as moving. “Bare” has united some of the valley’s best young voices in pivotal roles and creates an ensemble sound both solid and heartbreaking. Carrying sassy Aretha Franklin-esque numbers, a rave scene, a good handful of ballads and some excellent rock harmonies, “bare” creates sounds akin and better to those of “Rent” or “Spring Awakening”. As well, a moving set and lighting design has stretched the artistic team to their limit, creating a beautiful, vaulted cathedral hall complete with a massive stained-glass rose window 10 feet in diameter and lit from behind for dazzling effect. All in all, the production value of the show proves to be very high and sure to impress all who come to the show.

“It’s such a rewarding process,” Director Joshua Kelly, after just finishing this spring’s “Evita”, dove into “bare” with gusto.  “And the end result is going to astound everyone who sees it by inspiring them and breaking their hearts.”

Performances of “bare: a pop opera” will take place at 7 p.m. on July 22, 23, 24, 29 and 30 in the FVCC Theatre inside the Arts and Technology Building on the FVCC Kalispell campus.  Tickets are $10 for general admission, $5 for senior citizens and free admission for all students.  Advanced tickets are available at the FVCC Bookstore in Blake Hall and online at www.fvcc.edu/fvcctheatre.  Remaining tickets will be available for purchase at the FVCC Theatre Box Office one hour before showtime.

Due to adult content and language, this play is recommended for mature audiences.  FVCC encourages theatre-goers with questions or comments to contact Artistic Director Joshua Kelly at joshuakelly116@gmail.com, or (406) 212-1599.