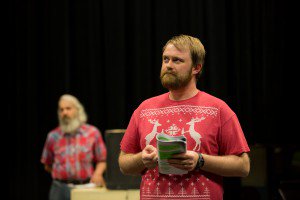 Flathead Valley Community College Theatre will open its summer theatre season with the darkly comedic powerhouse of a text, “The Last Days of Judas Iscariot,” by Stephen Adly Guirgis.

One of the last plays that Philip Seymour Hoffman directed before his untimely passing, “The Last Days of Judas Iscariot”chronicles the efforts of Fabiana Cunningham, a defense attorney in Hope, a suburb of Purgatory, who, armed with a court order signed by God, takes up an appeal to get Judas Iscariot out of Hell after his betrayal of Jesus. Festooned with numerous pieces of theological debate, tongue-and-cheek satire, quotations from church fathers, gospel characters and historical persons otherwise making entrances into the discussion, “The Last Days of Judas Iscariot”is a show that demands a lot from the audience but gives it back 10-fold in enjoyment, inspiration and contemplation.

The play is similar in nature to Pulitzer Prize-winning play “J.B.” as both provide objective views of their themes in many different ways. Like a trial, “The Last Days of Judas Iscariot” presents historical facts and allegories, leaving it up to the audience to decide their own verdicts.

Referred to by Ben Brantley in The New York Times as “a playwright to reckon with in recent years: a fierce and questing mind that refuses to settle for glib answers, a gift for identifying with life’s losers and an unforced eloquence that finds the poetry in lowdown street talk,” Guirgis has perhaps fulfilled this definition to the fullest with the creation of this epic, heartening and tragic story.

“To me, it’s a relationship play,” said Sherman. “The show is full of humor and heart. It’s going to be very different than what people may expect.”

Sherman is a Kalispell native and graduated from Flathead High School in 2002. Following high school, he moved to Los Angeles where he studied acting at the American Academy of Dramatic Arts. Four years later, he moved to New York where he worked in the independent film industry and earned a bachelor’s degree in communication and culture from The City University of New York. A desire to do something different and learn Portuguese took him to Rio de Janeiro, Brazil, where he spent a semester abroad studying social services at Pontifical Catholic University of Rio de Janeiro. He then returned to his hometown of Kalispell where he directed Flathead High School’s production of “Waiting for Lefty” and starred in his first FVCC Theatre production, “Holes in the Wall,” an original play written by FVCC alumnus Cohen Ambrose. Sherman’s newly found passions for traveling and providing aid to Brazil’s poverty guided him back to Brazil where he spent a year volunteering in the slums teaching English and serving as a freelance writer for The Rio Times. A year later, Sherman decided to call Montana home, and he returned to the Flathead Valley with enthusiasm to get involved in the local theatre scene. He spent last fall directing Flathead High School’s production of “Lord of the Flies,” and performed stage reading for Whitefish Theatre Company’s recent production of “How Did I End Up Here?” This summer, he landed his first directing role for FVCC Theatre.

“I’m really excited to be involved in FVCC Theatre, directing a play that I believe is really important,” he said.

“The Last Days of Judas Iscariot” will take place July 25 and 26 and August 1 and 2 at 7 p.m. in the FVCC Theatre inside the Arts and Technology Building on the college campus in Kalispell. Tickets are $5 for general admission and free admission for all students and can be purchased at the FVCC Bookstore, online at www.fvcc.edu/theatre.html, or at the FVCC Theatre Box Office one hour prior to showtimes. Due to adult language and references, mature audiences are strongly advised.