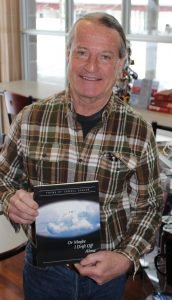 FVCC Professor’s Poetry to be Featured on National Public Radio

“The Writer’s Almanac with Garrison Keillor,” a show that airs on National Public Radio, will feature a poem written by FVCC English Professor Lowell Jaeger during the January 16program. Keillor, the producer and host of the show, will read “After Second Shift” from Jaeger’s most recent book, “Or Maybe I Drift Off Alone.” “The Writer’s Almanac” airs every weekday at 9 a.m. and is broadcast via Montana Public Radio on KUKL Kalispell 90.1 FM and KUFM Missoula 89.1 FM.

This is the second time Keillor has chosen one of Jaeger’s poems to read on “The Writer’s Almanac.” In 2010, Keillor read “Confessions” from Jaeger’s fourth book of poetry.

Jaeger is founding editor of Many Voices Press and recently edited “New Poets of the American West,” an anthology of poets from western states. Lowell has taught writing classes at numerous conferences and workshops and is currently Professor of English/Creative Writing at FVCC, where he also serves as Humanities Division Chair. Jaeger has taught at FVCC since 1983. He is a graduate of the Iowa Writer’s Workshop, winner of the Grolier Poetry Peace Prize and recipient of fellowships from the National Endowment for the Arts and the Montana Arts Council. Jaeger was awarded the Montana Governor’s Humanities Award for his work in promoting civil civic discourse. He is the author of seven collections of poems, including “Or Maybe I Drift Off Alone” (Shabda Press 2016).

Jaeger’s most recent book is available for purchase in local bookstores, including the FVCC campus bookstore, and online at major book retailer sites.

“After Second Shift”
by Lowell Jaeger

She’s stopped to shop for groceries.
Her snow boots sloshing
up and down the aisles, the store
deserted: couple stock boys
droning through cases of canned goods,
one sleepy checker at the till.

In the parking lot, an elderly man
stands mumbling outside his sedan,
all four doors wide to gusting sleet
and ice.  She asks him, Are you okay?
He’s wearing pajama pants, torn slippers,
rumpled sport coat, knit wool hat.

Says he’s waiting for his wife.
I just talked to her on the payphone
over there.  He’s pointing at
the Coke machine.  What payphone?
she says.  That one, he says.
It’s cold, she says, and escorts him inside.

Don’t come with lights
and sirens, she tells the 911
dispatcher.  You’ll scare him.

They stand together.  The checker
brings him a cup of coffee.
They talk about the snow.
So much snow.

They watch for the cop.
This night, black as any night,
or a bit less so.