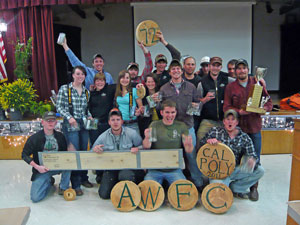 Last week the FVCC Logging Sports Team traveled to Cal-Poly University in San Luis Obispo, California to compete in the Western Collegiate Logging Sports Championships sponsored by the Association of Western Forestry Clubs. Two year schools have a disadvantage when competing with the larger universities and it had been seven years since the Flathead team had won the event. Men and women compete together as a team but first year students rarely score in these competitions and the entire FVCC women’s complement were first year students going in to their first competition.

Before the trip, Coach Annie Beall said that this was a special group of students and under the guidance of team captain Ryan Pearson, she felt that they might not win, but it would take a mighty good team to beat them. When it was over, FVCC was the top team of the 13 colleges and universities attending.

The three day competition started with the water events and the Flathead potential showed up right  away with Shawn Callan winning the boom run and teammates Stefan McCrumb and Hannah Hoch taking first place in the men’s and women’s limber pole. To cap off the water events, Ben Miller took 3rd place in birling. The second day was all dry land and Jamee Perkins set the pace by winning the women’s caber toss and she was quickly followed by Gavin Lommatsch winning the men’s caber toss. The rains let up enough to make the pole climb safe for the competitors and Flathead showed they liked heights as well as water with Ben Miller winning the men’s pole climb and Casey Pearson the women’s.

The heart of logger sports is the saws and axes and FVCC continued their dominance starting with Seth Bergman and Lauren Callan winning the Jack and Jill buck, with Seth also winning the men’s single buck. The single buck is perhaps the toughest event to master and Jamee Perkins had practiced hard all winter resulting in her blowing the competition away in the women’s single buck to secure another first place. The last two crosscut events were the men and women’s double buck with Seth Bergman and Ben Miller winning the men’s and Hannah Hoch and Casey Pearson taking second place in the women’s double buck. Chainsaws are also including in the sawing events and FVCC showed the other colleges that Flathead folks know chainsaws with Ben Miller winning the power saw contest and Hannah Hoch winning the obstacle pole chainsaw race. The fastest event is the choker race and Lauren Callan ran away with first place.