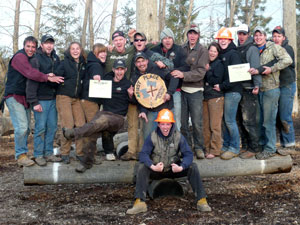 Last weekend the FVCC Logger Sports team traveled to the University of Idaho to compete at the Lumberjack Classic.  The day started out a little slowly for the team (at one point they found themselves behind UM by  40 points) but once they got back to doing what they know best, they started to pull ahead.  Fifteen of the sixteen competitors from FVCC ended up scoring points by placing 1st through 6th in one of their events.  At the end of the day FVCC had 273 points to 198 for UM, which meant that once again, FVCC came home with the Top Team Award.

To make the day even better, not only did they get the Top Team award, team members Shawn  and Lauren Callan (brother and sister) came home with the Bull of the Woods (top male competitor) and Belle of the Woods (top female competitor) honors.  Lauren outpaced the 2nd place competitor by 16 points by winning the Jack & Jill (with partner Seth Bergman), Vertical Speed chop and the Choker Race.  She also placed 2nd in the Double buck (with partner Jamee Perkins), Horizontal Speed chop, Caber toss and the Pulp Toss (with partner Shawn Callan).  Shawn took Bull of the Woods by winning the Horizontal Speed chop and the Choker race.  He also placed 2nd in the Obstacle pole and Pulp Toss (with his sister) along with 5th in the Caber Toss and Vertical Hardhit chop as well as a 6th in the Double Buck (with partner Ryan Pearson).

The team is now preparing for their home competition Stumpjumper Days this coming Saturday April 16th.  They hope to defend their title and keep their undefeated streak alive.  This Saturday’s competition will be held at the FVCC Logger Sports arena located just east of Hutton Ranch Plaza (turn east on Hutton Ranch road, go to the end of the pavement and head up and over the hill on the gravel road).  The Axe Throw is the first event and will start at 8am.  Events will run throughout the day until approximately 5pm.  Admission is free and there will be concessions on site.