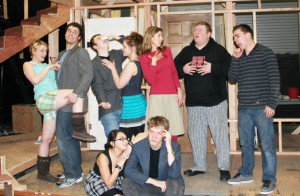 FVCC Kicks Off Spring Season with Timeless Classic "Noises Off"

A play within a play is the best way to describe this clever comedy.  “Noises Off” offers a backstage look at a company of actors during the rehearsal and subsequent tour of a bedroom farce called “Nothing On.”  The idea for it was born in 1970 when Frayn was standing in the wings watching a performance of “Chinamen,” a farce that he had written for Lynn Redgrave.  According to the playwright, “It was funnier from behind than in front, and I thought that one day I must write a farce from behind.”

Performances of “Noises Off” will take place March 2, 3 and 9 at 7 p.m. and March 10 at 2 p.m. and 7 p.m. in the FVCC Theatre inside the Arts and Technology Building on the FVCC Kalispell campus.

Tickets are $5 for general admission and free for all students.  Advanced tickets are available at the FVCC Bookstore in Blake Hall at (406) 756-3814 or online at www.fvcc.edu/fvcctheatre.html.   Remaining tickets will be available for purchase at the FVCC Theatre Box Office 60 minutes prior to showtimes.  Patrons are encouraged to reserve tickets early due to a seating configuration that limits prime seating.