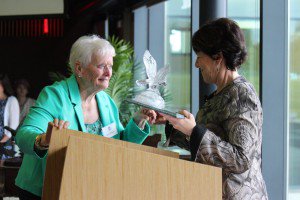 Two deserving individuals were honored with Flathead Valley Community College’s prestigious Eagle Award for the 2014-2015 academic year. Suzy Williams and the late Ralene Sliter, both of Kalispell, were presented the college’s prestigious Eagle Award by FVCC President Jane Karas, Ph.D., during the 20th annual President’s Dinner. The award honors individuals who have made outstanding contributions to FVCC.

Williams, along with her husband, Paul, became involved with the college in 1999 when he took on a leadership role on the FVCC Foundation Board. Together, they made FVCC a priority in their lives, sharing their time and talents and becoming generous supporters of the college’s projects. Williams became active in event fundraising, was founding chair of the FVCC Ambassadors and Alumni Association and was instrumental in establishing the Student Ambassadors program.

Upon her husband’s death in 2007, Williams established a memorial award in Paul’s name. She also picked up where her husband left off, joining the Foundation Board and carrying on the good work he had begun.

Among Williams’ many accomplishments at FVCC is her chairmanship of the 2011 capital campaign to help complete the Rebecca Chaney Broussard Center for Nursing and Health Science, the college’s first privately-funded building. Her leadership helped raised $1.36 million to complete the construction of the building, exceeding the goal by 36 percent over a period of nine months during the recent economic recession.

Karas praised Williams for serving as the epitome of advocacy of Flathead Valley Community College.

“Suzy has made it a priority to get to know just about everyone on campus and calls them by their names. Outside the college, she always carries her pride of FVCC wherever she goes, sharing college kudos with strangers and acquaintances alike,” she said.

Karas followed by dubbing Williams the college’s most loyal supporter whose passion has grown alongside the growth of the college.

“She pitches in wherever she is needed, whether it is packing silent auction items for the Festival of Flavors Grand Wine Tasting, decorating for a fundraising dinner or folding programs at the last minute,” she said. “A gracious hostess, she frequently opens her historic home to the Foundation to host fundraising or donor appreciation events.”

Karas recognized Williams for her loyal contributions as a donor and for often being the first to write a check for a special project. Williams currently serves as co-chair for the FVCC Ambassadors and Alumni Association and on the FVCC Foundation Board and FVCC Nursing Advisory Committee. Karas thanked Williams for never missing a nursing graduation ceremony and for her service as a mentor for The Culinary Institute of Montana at FVCC.

In 2012, Karas honored Williams with her president’s Montana Mentor Award, given to honor a community leader who inspires Montanans with their leadership, vision, integrity and passion and who exemplifies the meaning of mentor.

Outside the college, Williams has served on multiple boards across Northwest Montana. Organizations include the National Advisory Board of Grizzly Athletics, President’s Advisory Council at the University of Montana, Conrad Mansion, CASA and Glacier Symphony. She is president of P.E.O. Chapter BM and a supporter of the Hockaday Museum, Bigfork Art and Culture Center, Kalispell Regional Healthcare and Flathead Lakers.

In 2000, Sliter joined the FVCC Foundation Board. Already a loyal volunteer and generous donor to the college, she became active on a number of foundation committees, including finance, board development and events. Furthermore, she took on leadership roles for all Foundation fundraising activities, including three capital campaigns, Christmas Tree Excellence, Springtime in the Rockies and Festival of Flavors, and was a founding member of the FVCC Alumni & Ambassadors Association.

Karas acknowledged Sliter’s exceptional commitment to the college, which was particularly notable following Sliter’s election to the Board of Trustees.

“Most would have stopped their activities on the Foundation board, but Ralene continued to take on more leadership roles,” Karas said. “She dedicated endless hours of her time to raise money, engaged others in the college, developed policy, and set a positive direction to make FVCC a better place for students, employees and the community at large.”

Outside FVCC, Sliter was a dedicated volunteer for various organizations throughout the community, including Kalispell Regional Healthcare, Conrad Mansion, P.E.O. Chapter BM, Chair of the League for the Glacier Symphony and Chorale, Chair of the Republican Women’s Chocolate Extravaganza and area K-12 schools.

Beyond her service to the college and the community, Sliter, along with her husband, Tom, who accepted the posthumous award on Sliter’s behalf, established the Sliters Ace Lumber and Building Supply Endowed Scholarship Fund for part-time or full-time students majoring in the trades. In 2013, their daughter, Andrea Goudge, established the Ralene Sliter Honor Scholarship for working parents with child care expenses with the purpose of supporting FVCC students who are “attending school to strive for betterment through education.”

“FVCC owes a debt of gratitude to this gracious individual whose leadership by example touched countless lives,” said Karas. “By recognizing Ralene’s contributions to FVCC, we honor her lifetime of service to our college and the larger community.”