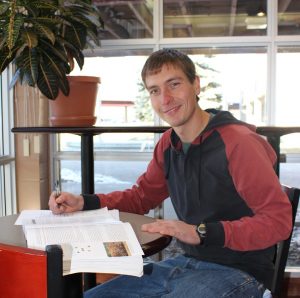 Nicolas Glynos, a 2016 graduate of Flathead Valley Community College, recently won a Young Botanist Award from the Botanical Society of America. Glynos earned an associate of science degree at FVCC in 2016 and transferred to Cornell University in Ithaca, New York last fall where he has distinguished himself through his outstanding academic performance and many plant science activities.

Glynos was one of 13 college students nationwide to receive the award. Botany Professor Mirabai McCarthy, Ph.D., worked closely with Glynos during his time at FVCC. “Nick is by far one of the most driven students I’ve encountered during my entire career. His ability to focus on his studies is impeccable, and his work ethic is unmatched,” said McCarthy. “His desire to succeed parallels his intense curiosity about the natural world.”

Since transferring to Cornell, Glynos has worked at the Liberty Hyde Bailey Hortorium, measuring, imaging and data-basing plant specimens and geo-referencing them on digital maps. He will travel across the western United States this summer to collect and photograph oak species for his senior thesis. He is on track to graduate from Cornell this December and plans to study systematics, evolution and diversity of tropical plants at the graduate level.