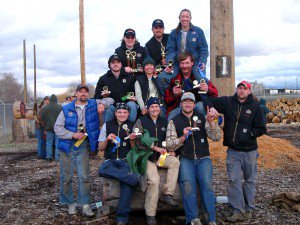 Last week, STIHL TIMBERSPORTS® announced the competitors that will travel to Poznan, Poland to represent the United States at the STIHL TIMBERSPORTS® World Championship November 13 and 14. Included on the five-man team is 2004 FVCC forestry graduate and Logger Sports team member Calvin Willard.

Over 100 of the world’s top lumberjack athletes from more than 20 nations will line up to determine the 2015 world champion in team and individual competitions.  Willard started competing in logger sports in 2002 at Flathead Valley Community College. This was his first year in the STIHL TIMBERSPORTS® Series, and he has seen great success finishing 7th in the 2014 US Championship and 3rd in the 2015 Northeast Pro Qualifier.

Now living in Barnet, Vt., Willard attributes the development of his TIMBERSPORTS® prowess to his years on the FVCC Logger Sports Team, where he helped lead FVCC to the Western Championship in 2004.

“I am really fortunate that FVCC is where I got my start,” said Willard. “The coaches were very knowledgeable in the sport compared to other colleges, which gave me a great advantage.”

Willard and the rest of the team will fly to Sweden next week to train with the Swedish team for a week before traveling onto Poland. While competing individually in the 30-plus competitions Willard participates in per year, he says he is excited to be competing on a team again as he did at FVCC.

“The camaraderie on the FVCC team was great, which is something that I really appreciated about competing in the college circuit. We did so much more together as a team than just compete. It was a really unique experience in that way,” said Willard.

The FVCC Logger Sports team has seen a wave of success since it started competing nationally in 1984. The team has taken home 14 first-place wins from the Association of Western Forestry Clubs (AWFC) Conclave, the largest logger sports event in the Northwest which includes all logging teams west of the Mississippi River.  FVCC is the only team to win four consecutive Conclave championships (1988 – 1991).  It also is the only team to capture the Conclave title five years in a row (1996 – 2000).

The STIHL TIMBERSPORTS® Series is an international competition series in lumberjack sports. The first wood chopping world championships took place in Tasmania in 1891. From there, logging sports took off around the world. Even today, nearly all the disciplines – three with the axe and three with the saw – replicate traditional forestry activities. All the disciplines revolve around the athlete and his handling of the sports equipment and the wood.

In the individual competition for the World Championship in Poznan, and in the national championships that took place around the world between May and October, the athletes compete in six disciplines – springboard, stock saw, standing block chop, single buck, underhand chop and hot saw. Willard’s strongest STIHL TIMBERSPORTS® Series discipline is the Standing Block Chop.

The World Championship attracts up to 10,000 spectators to the live events, with millions of fans following the competitions on Eurosport and other television stations worldwide.  The event schedule and a link to live stream the competition can be found at www.stihlusa.com/stihl-timbersports.

For additional information about the FVCC Logger Sports team, contact coach Annie Beall at 756-3876 or abeall@fvcc.edu.