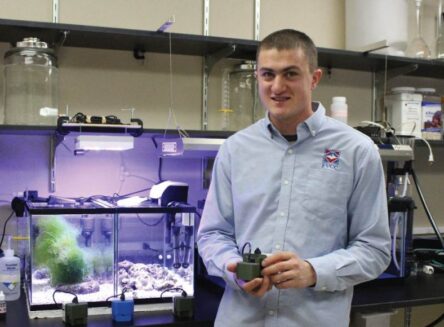 A Flathead Valley Community College graduate has tweaked the designs of a $30,000 chemistry machine to make a similar product for less than $100. Now, he’s hoping the tool can get in the hands of citizen scientists across the globe.

Friday afternoon, William Pardis, 22, entered the halls of FVCC less than a year after his graduation. He stood before a small audience crammed into a classroom and talked about a box that fit in the palm of his hand.

“We could deploy these to people around the world,” Pardis said. “With this, citizens could develop maps of [oceanic] pH levels and, together, we could better understand what’s happening on a global level.”

The instrument called a pHyter measures the ocean’s acidity, or pH levels. Anyone using the handheld, calibration-free tool can download its readings on their smartphone through an app.

Pardis estimated each of his instruments takes about an hour to make and include 10 parts from a 3D printer. The total cost is about $70, not including labor.

FVCC professor David Long said that while chemists have been able to use pH readers to check the ocean’s acidification, they hadn’t created a product that could go anywhere and be used by anyone.

He said measuring acidity reveals how the planet works, as well as the impact of carbon dioxide emissions. Considering 70 percent of the earth is covered in water, it’s important to understand, Long said.

“I think some people are a little baffled by the idea that in Montana, you would have a project that’s studying the ocean,” Long said. “But we want to have a global perspective in chemistry.”

PARDIS BEGAN developing the instrument for a physics class in his final year at FVCC. The goal was for the tool to join nine FVCC students on the Pacific island of Mo’orea in partnership with a UC Berkeley lab last year to monitor the chemical conditions of the ocean.

Friday afternoon, Pardis showed his audience a photo of the island. A light blue ring surrounded the mountainous land, revealing a reef that acted as the instrument’s “perfect testing ground.”

His second day on the island, Pardis and Long took the instrument out to the shore’s edge and tested it with ocean water for the first time.

The numbers of the open ocean measurements that appeared on his screen matched national trends — meaning the machine could compete with instruments used by professionals in the field.

Pardis said since he first began developing the pHyter at FVCC, he’s created 26 models of the instrument.

As he continues to fine-tune the design, he hopes someday soon it will be used around the world.

“About 70 percent of the coastline is under the jurisdiction of undeveloped countries — there isn’t long-term studies in the area,” Pardis said. “These instruments allow the research to be more accessible, to citizens and researchers … to build a more sustained program to document what’s going on in our world.”

TODAY, PARDIS is a full-time engineering student at Montana State University. Between classes, he assembles variations of his product and ships them to Sunburst Sensors — a world-leading chemical sensors manufacturer based in Missoula.

Sunburst then analyzes his work as they partner to modify the tool.

In the meantime, Pardis is getting requests to ship pHyter off to other research centers throughout the country. The National Oceanic and Atmospheric Administration is using Pardis’ instruments in studies at its marine sanctuary in southern California.

“It’s an educational tool,” he said. “Anyone can use one of the instruments, and not only understand the problem better, but be part of the solution.”

This summer, Pardis plans to build a freshwater version to test local lakes and rivers.

He said he can make hundreds of the instrument using a 3D printer. But if the pHyter’s popularity continues to grow, he may have to look for more productive assembly methods.