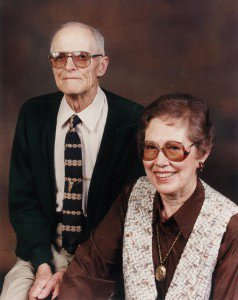 The late Thain and Fay White, former residents of Dayton, left a legacy gift valued at $2.4 million to the Foundation at Flathead Valley Community College. The Thain and Fay White Family Gift will be established as a permanent endowment to support FVCC and its future needs.

“We are incredibly grateful for this generous planned gift from Thain and Fay.  It will have a lasting impact on the Foundation’s ability to assist the college as we continue to meet the needs of local students and the community,” said FVCC President Jane Karas.

Thain and Fay were long-time Flathead Valley residents.  Thain was raised near Rollins and helped his father run the White family’s Columbia Sheep Company.  He was a self-taught historian, archaeologist and naturalist and created the Flathead Lake Lookout Museum near Lakeside in 1949.    Many of his published research papers are archived at Gonzaga University and The University of Montana.  Fay, a descendant of early Scottish and English pioneers in Canada, was originally from Mankota, Saskatchewan, Canada.  After graduating from the University of Manitoba in 1953, she sought employment in the Flathead Valley where she met and married Thain.  Fay had many interests—world events, politics, history and economics.  She enrolled in classes at FVCC in her later years, travelled and was an avid reader.  Fay was described by those who knew her as “a private person, independent, and self-sufficient, but also very caring and generous in nature.”  Thain passed away in 1999 and Faye died this past October.

The Foundation is working with college leadership to identify how this fund will be used to maximize its impact on student success and campus needs.

“We are touched by the generosity of Thain and Fay White and will honor their legacy with care,” said Foundation Chair Leslie Mercord.  “This gift will provide support for many years to come.”

For more information on the FVCC Foundation or on planned giving, contact Colleen Unterreiner at 756-3914 or colleenu@fvcc.edu.