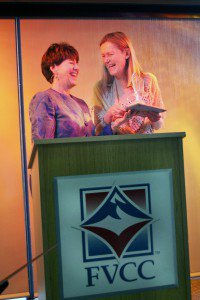 Unterreiner was presented the award for her leadership as executive director of the Flathead Valley Community College Foundation. According to Karas, she has taken the Foundation to the next level, exceeding capital campaign goals, thinking outside the box to continue to improve scholarship fundraising events, building relationships and providing more opportunities for student success.

“Colleen is a true student advocate,” said Karas. “She has continually set her focus on providing education to all students through developing more scholarship opportunities and growing programs and facilities. Her unsurpassed leadership in the area of institutional advancement has truly made a difference in the success of the FVCC Foundation and in the lives of our students and citizens of our community.”

Karas called Unterreiner the “ultimate good-will ambassador for the college, expressing genuine interest in everyone.” She even went as far as to say that no one is a stranger to Unterreiner.

“I don’t think there is anyone in the state Colleen doesn’t know,” she said.

Unterreiner joined the college 15 years ago and has served in various capacities. She began her career at FVCC as a grants and research specialist, moved to a position in the Human Resources Office, then worked in a number of roles in the Educational Services Office, beginning as executive assistant to the vice president and working her way up to director, educational services. Unterreiner has served in her current role at the college since 2009.

“I have been fortunate to work with Colleen in her many roles at FVCC,” said Karas. “I truly value her judgment and perspective on all issues. She is an inveterate problem solver and a visionary who always sees the big picture.”

Outside the college, Karas recognized Unterreiner for her commitment to serving her family and the community. According to Karas, Unterreiner brings unlimited passion and kindness to all in which she is involved.

“In addition to her full-time job, she serves her family as a wife and mother and the community as a dedicated volunteer in multiple organizations,” said Karas. “A talented musician, she is always willing to pull the bench up to the piano, whether at church, Rotary, a chamber event or a party.”

“If she is with you, life is a celebration,” said Karas.