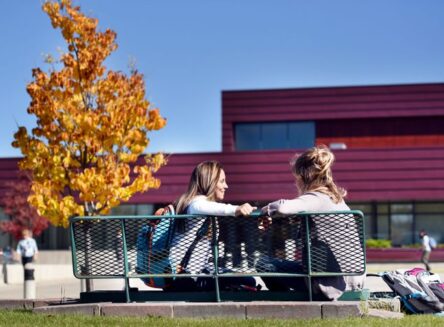 As Montana universities and colleges continue to collect enrollment numbers this month, Flathead Valley Community College announced it has seen its first steady increase in overall students since 2010.

This fall, FVCC reported it has 1,396 full-time students, a 1.7 percent increase over last year at this time. College state-allocated funding typically is shaped around this number. FVCC’s overall headcount reached 2,263 students this fall, a jump by 4.3 percent or 57 students compared to last fall.

“This is the first significant fall over fall increase we’ve had in headcount since fall 2010,” Tsidulko told the FVCC Board of Trustees during a regular meeting Monday afternoon.

In the after-effects of the 2008 economic crisis, FVCC enrollment hit record levels in 2010 with more than 2,500 students. President Jane Karas said as people tried to reenter the workforce, they sought new training and the college’s enrollment more than doubled.

“As the economy got better, people went back to work,” Karas said. “We did see fewer non-traditional students.”

In fact, the college experienced a decline in its overall headcount each fall from 2011 until 2015, when FVCC recorded a slight increase by eight students.

Tsidulko told the board Monday the college has also experienced a roughly 3 percent increase in non-traditional students, students she described as older than 24.

TURBULENT ENROLLMENT numbers have been a statewide trend in recent years.

In a phone conference during the regular Monday meeting, John Cech with the Montana University System said statewide enrollment numbers are still unknown — even though those are typically due roughly two weeks into each semester.

“The enrollment numbers are still coming in, not everyone met that 15 day enrollment [deadline],” Cech told the board. “Looking at preliminary numbers, and again, it’s very preliminary at this point, the state seems to be tracking pretty close to what we budgeted as far as enrollment.”

During the meeting, Tsidulko partially attributed FVCC’s enrollment numbers to the success of its Running Start Program, which allows high school students to earn college credits. This fall there are 455 participants in the program. Tsidulko said that’s a 20 percent increase in the program’s headcount with a 17 percent jump in full-time equivalent students.

“Running Start has more than doubled in the last five years,” she said.

President Karas said participants are able to collect college credits, with the first six credits offered at no cost for in-district students, and subsequent courses offered at reduced costs. That not only gives students an idea of what they’ll face in college — it also pours into FVCC’s enrollment.

“Thanks to all the hard work by everybody here on campus, we’ve really looked at better ways to retain students and to recruit new students,” Karas said.

Reporter Katheryn Houghton may be reached at 406-758-4436 or by email at khoughton@dailyinterlake.com.  Original story here: http://www.dailyinterlake.com/members/fvcc-fall-enrollment-trending-up/article_8c754774-8507-11e6-aad9-87edf71b12b7.html