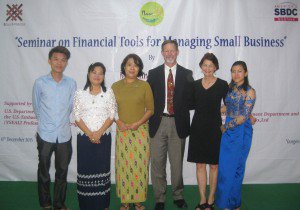 John and Jerri Balsam traveled to Myanmar (formerly Burma) and Cambodia in December with the mission of sharing knowledge and building relationships. As the director of the Northwest Montana Small Business Development Center, John was awarded his second Professional Fellows Program grant in two years through the Maureen and Mike Mansfield Center at the University of Montana to meet with economic developers and entrepreneurs about starting, managing and growing small businesses in these countries. Jerri received an FVCC Adjunct Professional Development grant to support her work to promote writing methods used in American universities. Her ultimate goal is to co-teach virtual writing classes in both countries.

The couple delivered presentations in Yangon, Myanmar and in Phnom Penh and Siem Reap, Cambodia and met with public officials and U.S. Embassy representatives in both countries.

“My goal for this trip was to deliver easily understood and immediately useful financial tools to as many entrepreneurs, business owners and economic developers as possible,” said John Balsam. “Our hosts in both countries did a stellar job of arranging schedules dominated by presentations and meetings.”

In his report to the U.S. State Department, Balsam suggested that the United States could further support the rapidly growing interest in capitalism in Southeast Asia by establishing a series of Small Business Development Centers in countries like Cambodia and Myanmar. “Entrepreneurs and business owners throughout Southeast Asia are hungry for information and assistance in small business start-up and management techniques,” he said.

According to Balsam, formal academic writing is not a major part of the curriculum in either Cambodia or Myanmar, but all of her presentations were well received by the audiences. “Both faculty and students asked many questions, and a large number of participants expressed interest in continuing to communicate individually with me online,” she said. “I came away believing the participants now better understand the importance of being able to communicate in English writing as well as orally.”

Besides sending U.S. citizens to foreign countries to share knowledge and build relationships, the Professional Fellows Programs brings representatives from foreign countries to the United States for intensive fellowships designed to broaden their professional expertise. Participants spend approximately one month in the United States, during which they receive hands-on exposure to national legislative offices, state legislatures, local government offices, businesses and non-profit organizations.

The Balsams have hosted several Professional Fellows Program participants in their home over the past five years, including Swezin Le, the director of Bella Interiors Co. in Myanmar, who stayed with the couple in 2014. Le served as one of the Balsam’s hosts during their time in Myanmar, arranging several presentations, meetings and tours for the couple and serving as an interpreter when necessary.