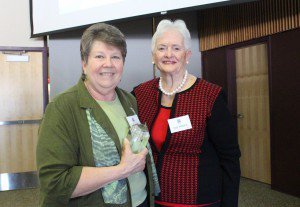 The Distinguished Alumni Award honors graduates of FVCC whose career achievements, service to others and their communities and passion for FVCC rises above the rest. Hodges was recognized for giving a lifetime of service, leadership and generosity to her alma mater, Flathead Valley Community College, and for living the FVCC mission to improve lives through lifelong learning.

Hodges began her career at FVCC in 1973 as a non-paid secretary. Throughout her tenure, she worked her way toward receiving an associate’s degree at FVCC and later, her bachelor’s and Master of Business Administration degrees from The University of Montana, all while serving in 11 different positions at the college and raising a family. Throughout her career, she worked in nearly all college departments, including instruction, student services, planning and development, institutional research, enrollment management, grant management and business services. Upon her retirement, she was presented the honor of Dean Emeritus in recognition of her nearly 40 years of service to the college.

During the award presentation, Unterreiner acknowledged Hodges for having many skill sets, which resulted in her serving in various top-level positions, from vice president and dean of educational services to chief financial officer.

But, according to Unterreiner, it was what Hodges did beyond her jobs that sets her apart from others. She credited Hodges’ leadership as being key in seeing FVCC students and employees through many periods of change and transition. As a student and community advocate, Hodges chaired and served on the college United Way Committee for many years; played an instrumental role in founding the college’s Employee Giving Fund, which provides emergency funds for students going through difficult times or those in need; chaired the college’s budget committee; founded the college’s intramurals program; helped establish and accredit new academic programs; served on the college’s founding Alumni Council; and taught as an adjunct instructor for credit and non-credit classes.

“She never sought awards or recognition, just gave her talents daily to make FVCC a better place for students and the community as a whole,” said Unterreiner of Hodges.

Additionally, Hodges was recognized for her generous support as a scholarship donor.

“Never waiving from her professional mantra of staying student-focused, Hodges took her passion for student success to heart as a dedicated donor to the FVCC Foundation, an organization which she continues to support,” said Unterreiner.

“Her generosity, volunteerism and support over the years benefitted many a student,” Unterreiner added. “Faith set the standard for employee giving and continues to stay involved in Foundation activities today.”

For more information, contact Tara Roth at 756-3912 or troth@fvcc.edu.