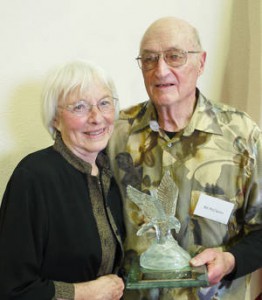 Bill McClaren, the last living founder of Flathead Valley Community College, and his wife, Lois, were presented the college’s prestigious Eagle Award for the 2010-2011 academic year by FVCC President Jane Karas during the 16th annual President’s Donor Dinner May 12.  The award honors individuals who have made outstanding contributions to FVCC.

According to the nomination, Bill was among the five visionaries who sat at that small card table in 1965 where the idea of a community college in Kalispell took flight.  He served as FVCC’s first employee, head guidance counselor and dean of students in the difficult and trying first years of formation.

“As numerous board members, presidents, faculty and staff came and left, Bill was the face of stable continuity that kept the institution afloat,” the nomination stated.  “Bill’s vision, enthusiasm, calm demeanor, competence and dedication in those early years paved the way for all that we see today.”

In her presentation, Karas acknowledged the McClarens as “two of FVCC’s greatest advocates.”  She recognized Bill as the caring, gentle leader of FVCC who was the anchor and the steady glue that kept the infant college alive and credited Lois as the wind beneath his wings.

“Without the vision of these individuals, FVCC might not exist,” she said.

In addition to attributing the McClarens’ role in the creation and development of the college, Karas recognized them for their outstanding contributions that have greatly influenced the college’s continued success.

“On any given week, you can find these two individuals on campus teaching a class, volunteering or attending events or activities,” she said.  “They are active members of the Ambassadors and Alumni Association and have been very generous in establishing an endowed scholarship.  Their continued dedication and commitment has helped not only the college but our arboretum bloom and grow.”

The perpetual award of the college symbol, a soaring bald eagle, is permanently displayed in the foyer of Blake Hall on the FVCC campus.  Each year’s recipient’s name is engraved on a gold plate and placed under the eagle.