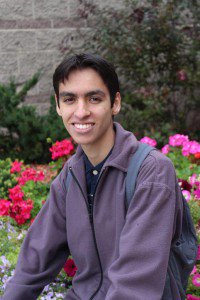 On October 16 from noon to 1 p.m., Viana de Carvalho will deliver a presentation for the community on higher education in Brazil. Guests are welcome to bring their own lunch.

On October 21 at 6 p.m., Viana de Carvalho will host a Brazilian film and culture night, featuring “Junho – O Mês que Abalou o Brasil” (June – The Month That Shook Brazil.) The film documents the June 2013 demonstrations against public transport fair increase in São Paulo which sparked large-scale revolt in the streets of Brazil. Viana de Carvalho will introduce the film and lead a discussion following the film.

Viana de Carvalho arrived on the FVCC campus this fall where he is teaching non-credit Portuguese classes and presenting free educational community events on his native country. He is one of over 400 young educators from 50 countries who traveled to the United States in the 2015-2016 academic year through the Fulbright FLTA Program to help internationalize U.S. colleges and universities, a key goal of many institutions as they prepare students for the 21st century workforce and globalized world.

Both events are free and open to the public and will take place in the Board Room inside Blake Hall on the college’s Kalispell campus.  For more information, call 756-3889.