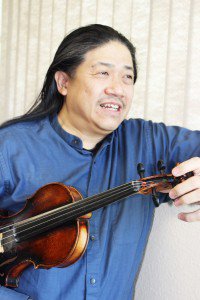 Flathead Valley Community College’s Music Department kicks off its Spring Concert Series January 29 with performances by faculty members Wai Mizutani and Idara Aguinaga.  All concerts in the series are free and open to the public and begin at 7 p.m. in the large community room inside the Arts and Technology Building on campus.

Honored for his violin performances in Carnegie Hall and Avery Fisher Hall, Mizutani has performed as a member of the Hong Kong Philharmonic, the New York Philharmonic and the Vancouver Symphony. As a soloist, he has performed for orchestras around the world. Mizutani has garnered top honors at Taiwan International and Five Towns Violin competition and is a Music Teachers National Association award winner. Throughout his career, he has performed with Kurt Masur, Zubin Mehta, Arnold Steinhardt, Yo-Yo Ma and Glenn Dicterow. He attended the Julliard School of Music and received a master’s degree in violin and orchestral training from the Manhattan School of Music in New York.

Vocalist Aguinaga discovered her gift for music at a very young age, and her exceptional abilities are openly demonstrated by performing some of the most difficult and moving arias in the coloratura world. She sings in 11 languages, including English, Spanish, Latin, French, Italian, German, Czech, Russian, Chinese and Hebrew. In addition to singing, Aguinaga is an accomplished violinist. She began teaching violin at the age of 13 and has won many solo competitions in Canada and the United States. She is a former music director of the Richmond Youth Orchestra String Ensemble and has been a member and guest performer of The University of British Columbia (UBC) Symphony Orchestra, UBC Chamber Orchestra, West Coast Symphony and Vancouver Symphony Orchestra, among other symphonic organizations.

The Spring Concert Series continues February 12 with a performance by folk musician Chuck Suchy. A working farmer from North Dakota, Suchy has performed on Garrison Keillor’s “A Prairie Home Companion” and at folk festivals around the United States. Acoustic Guitar Magazine describes Suchy’s music as “country music with its fingers in the soil and its heart heading down the highway on an Indian motorcycle.” In addition to his evening performance, Suchy will teach a guitar song writing workshop the same day at 2 p.m. in the large community room inside the Arts and Technology Building. The workshop is free and open to the public, and registration is not required.

Additional concerts in the series are scheduled for March 18, April 22, May 12 and May 13. For more information, visit www.fvcc.edu or contact Nicole Sanford at 756-4813.